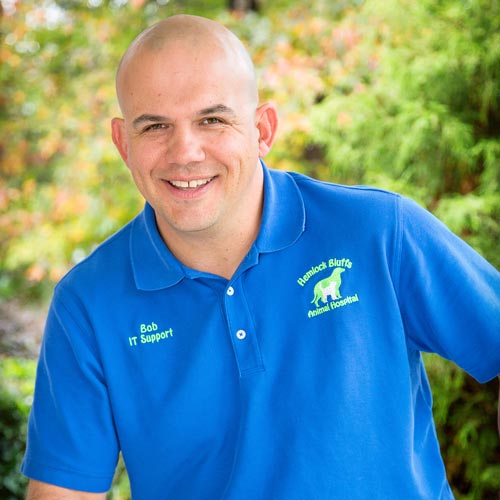 Bob was born in Ohio, but moved to Jacksonville, NC in 1984. After graduating from Southwest High School, he moved to Raleigh to attend NC State University, which is where he and Dr. Snyder met. They were married 2 years later and settled permanently in the Raleigh area. Bob worked for over 20 years as a CAD designer and mechanical engineer at Bell and Howell in Durham, but he had a second job on nights and weekends, working alongside Dr. Snyder as the practice grew. After many years of working both jobs, it became apparent in 2015 that Bob was needed full time at the hospital.  Around the clinic you can find Bob doing just about anything necessary. As our resident “Jack of all Trades” he helps Danielle with human resources, tracks our inventory, keeps all of our computers and technology working, does all of the physical building and equipment maintenance, and generally keeps things running smoothly for all of us. Whew! We don’t know how we ever managed without him! In his spare time, Bob enjoys golfing, watching football (serious Steelers fan here) and spending time with his family (of course!). He and Dr. Snyder have a beautiful daughter named Taylor, two dogs, Leo and Little Bit, a cat named Marmie and three horses (Bob says three too many!).

Contact us today to make your appointment.
Contact Us
Copyright ©2017 Hemlock Bluffs Animal Hospital. All Rights Reserved.
Back To Top